Here's the whole of human history as we are all led to believe.

People originated in Africa, moved on to Europe where they suddenly turned white, became Romans or Greeks and all human culture, art, literature and science began. Those who remained in Africa just hid from lions, ate wildebeest or each other, putting in their time until whitey came along to enslave them, eventually civilize and give them culture.

Modern archeology is systematically racist, Eurocentric and denies or ignores the rich heritage, scientific and cultural contributions of Africans. This is not to imply that archeologists are racist by design, but rather through tradition. 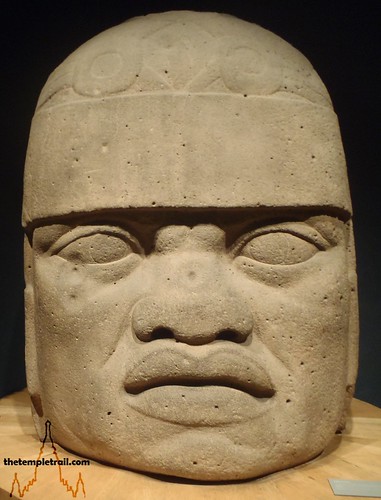 The core values, theories and methodology were developed well over a hundred years ago and modern archeology only strives to preserve and defend these outdated theories, although, there is concrete evidence clearly proving otherwise.

The more we examine the history of humanity the blacker it gets.

The mysterious Olmec of Mexico intrigue me to no end. We've all seen the huge facial carvings on monstrous stone that these ancient people left as their lasting legacy. Regardless of who you are, these are clearly the faces of African people.

There is no other way to view possibly view them.

This fact contradicts the traditional theories, so modern archeologists prefer to either ignore the Olmecs altogether, or spend considerable time trying to convince us that they are somehow, white.

These archeological theories, however, were based on an entirely different world view of a different era-a lily white one.

Rather than challenge these core values and outdated theories based on modern information and technology archeologists are committed only in preserving them. The fact that the Olmecs were black turns all theories of human progression on its head.

The Olmecs are considered the "mother of civilization" that all other early American societies sprung from. The Aztecs, Mayans and every other historically recognized early American civilization came about as the result of the Olmecs.

The science, culture, art and architecture all originated with this ancient society.

This Olmec presence is prevalent throughout Native American societies that later followed. The elaborate head dresses, ritualistic dances and artwork carry an African influence. The Hopis of the Americas share the identical creation myth, rituals and dance as the African Dogon tribe, although, they are separated by thousands of miles.

Olmec influence does not end there, however, and every Native American nation has shared customs or rituals with their African cousins. The Apache "Crown Dance" could just as easily be the "Mask Dance" practiced by some African cultures.

Imagine the repercussions to archeology or anthropology if they acknowledged that the Olmecs in fact, originated in Africa and are black.

Jamie Wendland is respected for well-researched political and cultural analysis. A contributor to Russian Pravda.RU and Oped News his articles and commentary also appear in a variety of international publications and journals. Feel free to email (more...)

Related Topic(s): Archeology, Add Tags
Add to My Group(s)
Go To Commenting
The views expressed herein are the sole responsibility of the author and do not necessarily reflect those of this website or its editors.

The Depth of Black History-The Bias of Archeology