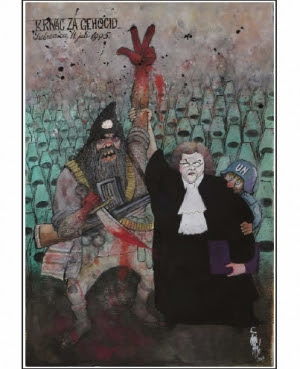 Why should Biljana Plavsic be held to a different standard?

Finally, Mrs. Subotic's contention that the "Plavšić case demonstrates that the international justice focus on individualizing accountability for mass atrocity is ill equipped to deal with the collectivist nature of such crimes" is perplexing. What alternate focus and what mode of accountability other than individual is the author advocating? Collective? If so, the position she takes is most disturbing.

Article 7 of the ICTY Statute recognizes only individual criminal responsibility. Paragraph 1 of Article 7 specifically stresses the individual nature of criminal liability. What mode of liability does Mrs. Subotic propose to substitute for it?

This is an important question not because Mrs. Subotic has the power to change the conceptual foundations of Western jurisprudence and bring social groups or nations that she dislikes collectively into the dock, but because suggesting such a notion even hypothetically undermines, or at least diminishes, a fundamental principle of what is considered justice in this part of the world. "Collectivist crimes," whatever these are, and Mrs. Subotic owes her readers clear guidance on that point, would seemingly require collective punishment. Is the author really willing to go that far? She should seriously ponder the ultimate ramifications of her thought, if that is the direction in which she is taking her argument. Whatever her current political allegiances or passport, Mrs. Subotic's ethnicity is rooted in the same "collective" that generated Mrs. Plavsic, as objectionable as the author may find her. Hasty broadening of the scope of criminal liability could work to Mrs. Subotic's disadvantage. She would be well advised therefore not only to keep criminal liability individual but also to insist, for her own personal protection and just in case someone should take her philosophical musings seriously, on all the legal safeguards which our marvelous and increasingly neglected tradition of jurisprudence has bequeathed to us.

At the end of her text, Mrs. Subotic acknowledges the research assistance of Joshua Fryer. Without meaning to be facetious, one must wonder what research help could possibly have been required to cobble together this mediocre and platitudinous production.

Endnote:[1] The Krstic trial judgment was notably non-committal on the issue of reburials. While absolving the defendant personally of knowledge or involvement in the alleged cover-up, the Chamber admitted that evidence that it occurred was at that point generally scarce. That was in 2001, but conveniently plea bargainer Momir Nikolic came along a year later to fill in the details. In the Krstic judgment, while claiming that there was forensic evidence of a "concerted effort to conceal the mass killings by relocating the primary graves," the Chamber concedes nevertheless that "the Prosecution presented very little evidence linking Drina Corps Brigades to the reburials and no eyewitnesses to any of this activity were brought before this Trial Chamber." (Krstic Trial Judgment, par. 257)

Stephen Karganovic is the president of the Srebrenica Historical Project.

Related Topic(s): Bosnia War; Bosnian Genocide; Bosnian War, Add Tags
Add to My Group(s)
Go To Commenting
The views expressed herein are the sole responsibility of the author and do not necessarily reflect those of this website or its editors.

Srebrenica 'Genocide', But Where are the Bodies?