Within this spectrum of horror, we decided to focus on the issue of sexual violence. We found it outrageous that those who have doubted the accuracy of Rohingya refugees have said that the young women and girls who said that they were raped were lying and that they were paid to give false testimony.

DB: I want to remind people that, together with Leslie Kean, I reported on this use of rape as a tool of war by the Burmese army in a cover story in The Nation magazine in 1996. At the time, Aung San Suu Kyi expressed her concern about that when she was in solitary confinement. She has been silent since, but this has been going on and the military denied it then as they are denying it now.

DB: The United Nations took some action today [May 3]. Could you talk about that? I believe Aung San Suu Kyi actually said a few words, but she won't say the word "Rohingya."

JH: Unfortunately, the word "Rohingya" has become something of a lightning rod. Even in a tea shop in Rangoon you don't dare say it, it is that inflammatory. The Islamophobia which is sweeping Burma now is fueled by this ultra-nationalist, right-wing fervor which sees Buddhism as the national religion and any others as actually threatening the state of Burma. 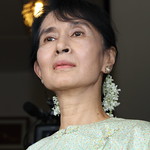 Aung San Suu Kyi issued a statement [on May 1] which was the first positive sign from the government. Her statement said that it was time for the Burmese government to work in partnership with the United Nations Development Program and the UNHCR.

Very importantly, the UN Special Rapporteur for Human Rights, Yanghee Lee, has repeatedly pointed out that there could be hallmarks of genocide in this. The United Nations has already clearly identified this as ethnic cleansing but the question as to whether genocide has taken place remains to be investigated. Unfortunately, Yanghee Lee was denied access to the country. This was a very serious obstacle to accepting the role of the United Nations in trying to understand the root causes of this conflict.

DB: How would you explain Aung San Suu Kyi's response to all of this?

JH: The military remain in firm control of three of the most important ministries in the country. They remain in economic power. And more importantly, 25% of parliament is appointed by the military. To enact any law you need 76% of parliamentary votes. So there can't be any real reform.

Aung San Suu Kyi is walking a tightrope in this political transition. This crisis was an opportunity for her to put her hat back on as a human rights icon and create a moral compass. If she spoke out, her countrymen would follow. If she reminded people of the tenets of Buddhism, including loving kindness and compassion, I believe it would help reduce the hysterical hatred and racism.

DB: I want to bring you in, Miu, a student activist at UC Berkeley working with the Human Rights Center there. You are documenting the role that Facebook seems to be playing in perpetrating mass murder.

Miu: As you have both mentioned, there has been a history of discrimination against Rohingya in Myanmar. When we analyze this conflict, we have to ask "Why now?" Our team has discovered that, with the rise in tech accessibility after 2013, when the government ended its monopoly of internet access, penetration went from 4% to 90% in the country. This rise in tech accessibility has been linked with a rise in violence and a rise in hate speech online.

In Myanmar, Facebook is a form of news. The people there see Facebook as the truth. With the internet becoming accessible to the people so quickly, digital illiteracy is a massive problem within the country. People don't know how to recognize fake news and propaganda.

In many cases, incitement of hate speech online can lead to actual violence on the ground. We saw this in July 2014 when an unverified story that a Muslim tea shop owner raped a Buddhist employee circulated online. This post was then promoted by Ashin Wirathu, the leader of the Buddhist Nationalist 969 movement, and led to riots where Muslim shop owners were targeted. Two people were killed and 14 were injured.

Our team has also documented incidents of hate speech online by government officials, for example, in which they have referred to the Rohingya as "detestable human fleas." We actually gathered a post by the chief of command of the military saying "Race must be swallowed by another race."

Related Topic(s): Aung San Suu Kyi; Burmese Army; Ethnic Cleansing; Facebook; Mass Murder; Rape; Refugees; Rohingya, Add Tags
Add to My Group(s)
Go To Commenting
The views expressed herein are the sole responsibility of the author and do not necessarily reflect those of this website or its editors.