"In the UK recently, the Attorney General gave a speech in defense of the UK's drone policy, the assassination of people including British nationals abroad. This execution without a hearing is based on several criteria, he reassured us. His speech was repeated slavishly in the British media. In fact, the Guardian
newspaper simply republished the government press release absolutely verbatim, and stuck a reporter's byline at the top.
The media have no interest in a critical appraisal of the process by which the British government regularly executes without trial. Yet in fact it is extremely interesting. The genesis of the policy lay in the appointment of Daniel Bethlehem as the Foreign and Commonwealth Office's Chief Legal Adviser. Jack Straw made the appointment, and for the first time ever it was external, and not from the Foreign Office's own large team of world-renowned international lawyers. The reason for that is not in dispute. Every single one of the FCO's legal advisers had advised that the invasion of Iraq was illegal, and Straw wished to find a new head of the department more in tune with the neo-conservative world view.

"Straw went to extremes. He appointed Daniel Bethlehem, the legal 'expert' who provided the legal advice to Benjamin Netanyahu on the 'legality' of building the great wall hemming in the Palestinians away from their land and water resources. Bethlehem was an enthusiastic proponent of the invasion of Iraq. He was also the most enthusiastic proponent in the world of drone strikes.

"Bethlehem provided an opinion on the legality of drone strikes which is, to say the least, controversial. To give one example, Bethlehem accepts that established principles of international law dictate that lethal force may be used only to prevent an attack which is 'imminent.'

"Bethlehem argues that for an attack to be 'imminent' does not require it to be 'soon.' Indeed you can kill to avert an 'imminent attack' even if you have no information on when and where it will be. You can instead rely on your target's 'pattern of behaviour'; that is, if he has attacked before, it is reasonable to assume he will attack again and that such an attack is 'imminent.'

"There is a much deeper problem: that the evidence against the target is often extremely dubious. Yet even allowing the evidence to be perfect, it is beyond me that the state can kill in such circumstances without it being considered a death penalty imposed without trial for past crimes, rather than to frustrate another 'imminent' one.

"You would think that background would make an interesting story. Yet the entire 'serious' British media published the government line, without a single journalist, not one, writing about the fact that Bethlehem's proposed definition of 'imminent' has been widely rejected by the international law community. The public knows none of this. They just 'know' that drone strikes are keeping us safe from deadly attack by terrorists, because the government says so, and nobody has attempted to give them other information."

Remember, this is not just academic argument, the Bethlehem Doctrine is the formal policy position on assassination of Israel, the U.S. and U.K. governments. So that is lie No. 1. When Pompeo says Soleimani was planning "imminent" attacks, he is using the Bethlehem definition under which "imminent" is a "concept" which means neither "soon" nor "definitely going to happen." To twist a word that far from its normal English usage is to lie. To do so to justify killing people is obscene. That is why, if I finish up in the bottom-most pit of hell, the worst thing about the experience will be the company of Daniel Bethlehem.

"The Death of Hundreds, if Not Thousands of Americans"

Let us now move on to the next lie, which is being widely repeated, this time originated by President Donald Trump, that Soleimani was responsible for the "deaths of hundreds, if not thousands, of Americans." 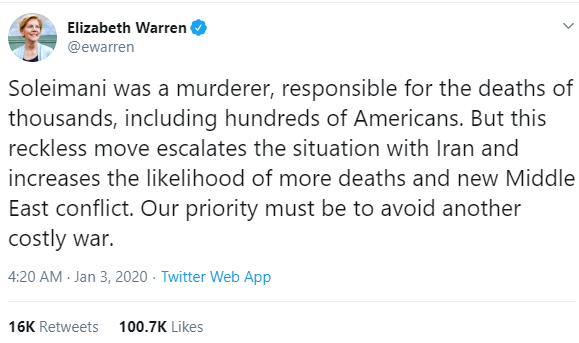 This lie has been parroted by everybody, Republicans and Democrats alike.

Really? Who were they? When and where? While the Bethlehem Doctrine allows you to kill somebody because they might be going to attack someone, sometime, but you don't know who or when, there is a reasonable expectation that if you are claiming people have already been killed you should be able to say who and when.

The truth of the matter is that if you take every American killed including and since 9/11, in the resultant Middle East related wars, conflicts and terrorist acts, well over 90 percent of them have been killed by Sunni Muslims financed and supported out of Saudi Arabia and its Gulf satellites, and less than 10 percent of those Americans have been killed by Shia Muslims tied to Iran.

This is a horribly inconvenient fact for the U.S. administrations which, regardless of party, are beholden to Saudi Arabia and its money. It is, the U.S. affirms, the Sunnis who are the allies and the Shias who are the enemy. Yet every journalist or aid worker hostage who has been horribly beheaded or otherwise executed has been murdered by a Sunni, every jihadist terrorist attack in the U.S. itself, including 9/11, has been exclusively Sunni. The Benghazi attack was by Sunnis, Isil are Sunni, Al Nusra are Sunni, the Taliban are Sunni and the vast majority of U.S. troops killed in the region are killed by Sunnis.