Another impressive fact is that Winnipeg is not a large city, and Regina only has some 200,000 inhabitants. Yet both cities have a truly vibrant intellectual life. They have highly educated and informed individuals who clearly oppose the Western regime and global dictates. They have people who struggle against the regime. 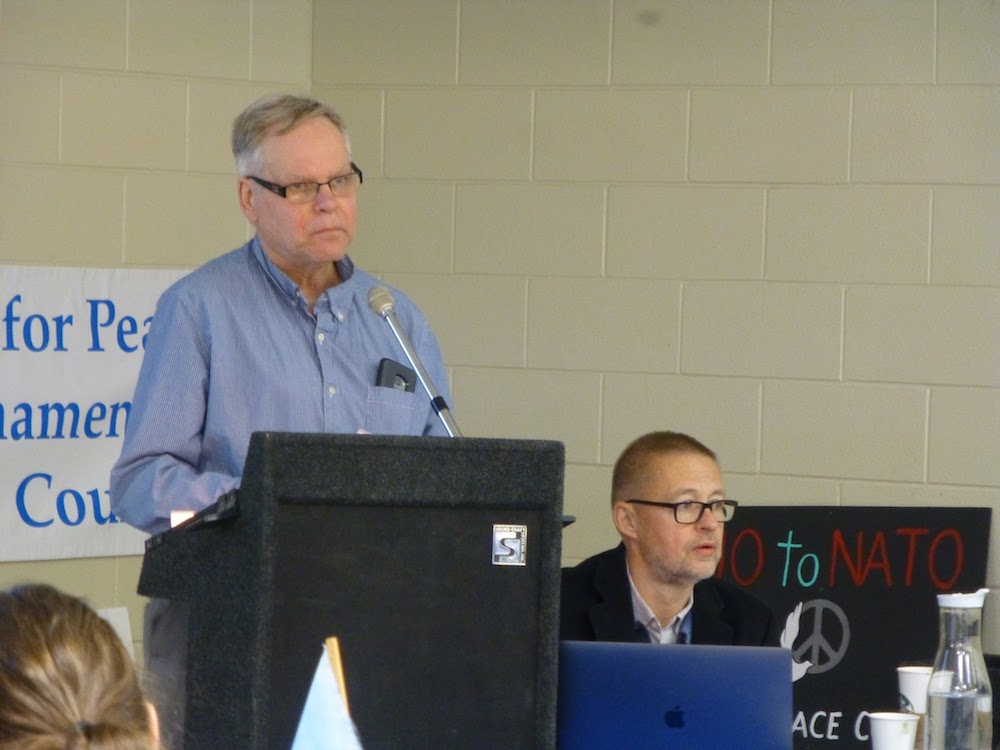 And what I also noticed: our conference, organized by the Regina Peace Council (of which Ed Lehman is President),was covered by the local 'mainstream' media, by the Regina Leader Post, for instance, which offered a sympathetic account in an article "Group of Reginans protest Canada's involvement in NATO". The newspaper had no problems disseminating my ideas, either. The same goes for the local community radio station. And Erin Weir, an independent Member of Parliament, who represents the Regina-Lewvan constituency - personally brought sincere greetings to the conference.

I often speak at universities, worldwide. But in Regina I was even invited to address a class of high school students, who were able to formulate and ask very relevant questions.

I don't want to say that in Canada 'I participated in mainstream events', but in both Regina and Winnipeg, I was 'allowed' to interact with, and to influence various professors, students, and through media outlets, even the local public.

Anti-war activists here have their Saskatchewan Peace News publication, which is now in its 26th year of existence. As well as reporting on local peace events, it exposes ideas that cripple the peace movement; the doctrine of "Responsibility to Protect" and "humanitarian interventionism", as Dave Gehl in his speech said, "A 21st-century version of 'The White Man's Burden'; and is used as an organizer of peace events.

For Ed Lehman, 'peace' is not just a pretty word or a slogan, and he is not the only one in Regina who think this way. He believes that "Today's progressives need to unite the fight for peace with the fight for social and economic advance with the fight against climate crisis and the battle against racism. Deep transformation of the economic and social system is required in North America for justice to prevail; we saw in the thirties, forties, fifties and sixties that even in the belly of the beast, victories can be won."

Justice and racism--Unfortunately, racism is not just an ugly word here, in Saskatchewan and in Canada in general. It is a reality, a shame. Many of the First Nations people, or call them original inhabitants of Canada, are still living in appalling misery, suffering from discrimination, as I was told by Julie Peebles, a young woman with a great concern for the life-situation facing Canada's aboriginal population, who noted the similarities between AIDS as depicted in my film on Kenya and the situation in Saskatchewan. Here, indigenous people are facing social conditions similar to those in the poorest countries on earth.

I suggested, first jokingly, that I should return to Regina, later this year, in order to make a short documentary depicting the plight of the First Nations: "Wouldn't that be embarrassing: a Russian traveling here, and doing precisely what should be an obligation to any decent Canadian filmmaker?" It was not taken lightly: the people of Regina full-heartedly welcomed my proposition, offering help, support; both moral and practical (like lodging me, driving me around, identifying important locations for my film). And now, I am seriously determined to come back and to help.

After the event, and after my departure, many public figures praised the dedicated work and struggle of the Regina Peace Council. One of the letters stated:

"RPC once again has demonstrated to the entire peace movement the possibilities that exist and can be realized from careful and thoughtful organizing and mobilizing of public peace action efforts and in particular by inviting the new generation of peace activists and dedicated anti-imperialist voices to the platform.

Related Topic(s): Andre Vltchek; International Peace Conference, Add Tags
Add to My Group(s)
Go To Commenting
The views expressed herein are the sole responsibility of the author and do not necessarily reflect those of this website or its editors.