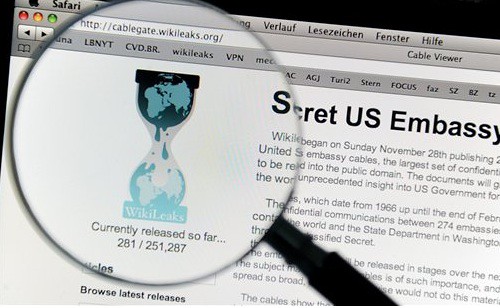 *Special thanks to C-Cyte for recording my tweets and posting them online in a post for people to view if they do not normally use Twitter.

** Also, it's an honor to write that this list of one hundred is featured at the end of an editorial WikiLeaks just published on "100 Days of Cablegate." WikiLeaks encourages readers and supporters to view this list for information on what Cablegate has revealed so far.


One hundred days ago, WikiLeaks began to release the US State Embassy cables. The release event, which continues, became known as Cablegate.

A future post will include a look at Cablegate and what its impact on journalism, international diplomacy, and human rights has been and what its role has been in world events like the uprisings and revolutions the world that are currently unfolding. For now, it is worth recounting what has actually been revealed because of the release.

One common denominator can be found in a majority of the cables: corruption. For all the talk of this country and that country being corrupt and that country being so corrupt it's gone, the plain fact is that between all the countries of the world, perhaps as a result of American coercion and/or threat of force, the world is one corrupt planet.

Point blank, the fallacy that these cables revealed nothing new is utter bullshit. And anyone who says they have revealed nothing we didn't already know deserves to hear you say or tweet that to their face.

WikiLeaks has managed to partner with 50 media outlets over the course of the past months. 5,287 of 251,287 cables have been released so far. This not only means there will likely be a 200th, 300th and 400th Day of Cablegate but also means there will be many more revelations to come in the next year.

The following are 100 revelations, which this author tweeted this morning consecutively to mark the 100th Day. The one hundred tweeted revelations are dedicated to alleged whistleblower and hero Bradley Manning, who is currently being abused and humiliated in a military brig in Quantico, Virginia. He has been denied a right to a speedy trial. He has been issued charges but yet the military and government has taken its time with his case. And so, he has been detained and imprisoned since June and, most recently, the military started to force him to sleep naked at night.

If Manning released the material (and he is charged by the military with releasing the cables), it is he who has given us the privilege of reading about what the US government and foreign leaders have been up to for the past years. Manning, if he is the whistleblower, has helped usher in an era of openness and transparency that has shaken the world of diplomacy, international relations and journalism.

Here are the one hundred, which were tweeted this morning:

99. US' secret list of Allied countries it thinks should contribute more to Afghan war http://bit.ly/fLqsHI #cablegate

97. New Zealand did about-face on troops to Iraq, feared missing out on lucrative Oil for Food contracts http://bit.ly/i4rZES #cablegate

Kevin Gosztola is managing editor of Shadowproof Press. He also produces and co-hosts the weekly podcast, "Unauthorized Disclosure." He was an editor for OpEdNews.com
Related Topic(s): Bradley Manning; Cablegate; Diplomacy; Journalism; Julian Assange; Military; Wikileaks; Wikileaks, Add Tags
Add to My Group(s)
Go To Commenting
The views expressed herein are the sole responsibility of the author and do not necessarily reflect those of this website or its editors.