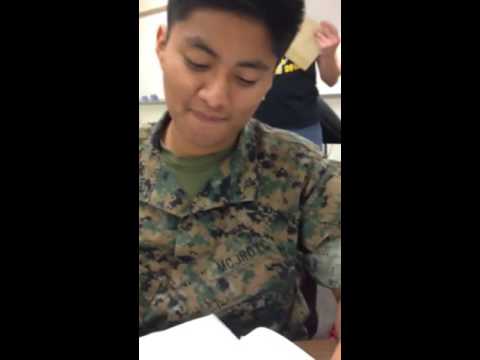 Racism in the military
(Image by YouTube, Channel: Next Level Up)   Details   DMCA

Since George Floyd was murdered, we have seen an increasing convergence of the "war at home" against Black and brown people with the "wars abroad" that the U.S. has waged against people in other countries. Army and National Guard troops have been deployed in U.S. cities, as militarized police treat our cities as occupied war zones. In response to this "endless war" at home, the growing and thunderous cries for defunding the police have been echoed by calls for defunding the Pentagon's wars. Instead of seeing these as two separate but related demands, we should see them as intimately linked, since the racialized police violence on our streets and the racialized violence the U.S. has long inflicted on people around the world are mirror reflections of each other.

2 -- Just as the U.S. was created by taking over the lands of Indigenous peoples by force, so America as an empire uses war to expand access to markets and resources. Settler colonialism has been an "endless war" at home against Indigenous nations, who were colonized when their lands were still defined as foreign territories, to be annexed for their fertile land and natural resources. The Army forts stationed in Native nations back then were the equivalent of foreign military bases today, and the Native resisters were the original "insurgents" who were in the way of American conquest. The "Manifest Destiny" colonization of Native lands morphed into overseas imperial expansion, including the seizure of Hawai'i, Puerto Rico, and other colonies, and the counterinsurgency wars in the Philippines and Vietnam. In the 21st century, U.S.-led wars have destabilized the Middle East and Central Asia, while increasing control over the region's fossil fuel resources. The Pentagon has used the template of the Indian Wars to frighten the American public with the specter of "lawless tribal regions" that need to be "tamed," within countries such as Iraq, Afghanistan, Yemen, and Somalia. Meanwhile, Wounded Knee in 1973 and Standing Rock in 2016 show how settler colonialism can become remilitarized back in the U.S. "homeland." Stopping oil pipelines and toppling Columbus statues shows how Indigenous resistance can also be renewed in the heart of the empire.

3 -- The police and military are both internally plagued by racism. With the Black Lives Matter protests, many people have now learned about the origins of U.S. police in all-white slave patrols. It is no accident that hiring and promotion within police departments have historically favored whites, and officers of color around the country continue to sue their departments for discriminatory practices. The same is true in the military, where segregation was official policy until 1948. Today, people of color are pursued to fill the bottom ranks, but not the top positions. Military recruiters set up recruiting stations in communities of color, where government disinvestment in social services and education makes the military one of the few ways to not only get a job, but access to health care and a free college education. That's why about 43 percent -- of the 1.3 million men and women on active duty are people of color, and Native Americans serve in the Armed Forces at five times -- the national average. But the upper echelons of the military remain almost exclusively a white-boys' club (of the 41 senior commanders, only two are Black and only one is a woman). Under Trump, racism in the military is on the rise. A 2019 survey found that 53 percent of servicemembers of color said they had seen examples of white nationalism or ideologically driven racism among their fellow troops, a number up significantly from the same poll in 2018. Far-right militias have attempted to both infiltrate the military and collude with police.

4 -- The Pentagon's troops and "surplus" weapons are being used on our streets. Just as the Pentagon often uses the language of "police actions" to describe its foreign interventions, police are being militarized within the U.S. When the Pentagon ended up in the 1990s with weapons of war it no longer needed, it created the "1033 Program" to distribute armored personnel carriers, submachine guns, and even grenade launchers to police departments. More than $7.4 billion in military equipment and goods have been transferred to more than 8,000 law enforcement agencies -- turning the police into occupation forces and our cities into war zones. We saw this vividly in 2014 in the aftermath of the killing of Michael Brown, when police flush with military gear made the streets of Ferguson, Missouri look like Iraq. More recently, we saw these militarized police forces deployed against the George Floyd Rebellion, with military helicopters overhead, and the Minnesota Governor comparing the deployment to an "overseas war." Trump has deployed federal troops and wanted to send in more, much as active-duty troops were previously used against several workers' strikes in the 1890s-1920s, the Bonus Army veterans' protests of 1932, and Black uprisings in Detroit in 1943 and 1967, in multiple cities in 1968 (after the assassination of Dr. Martin Luther King Jr.), and in Los Angeles in 1992 (after the acquittal of the police who had beaten Rodney King). Sending in soldiers trained for combat only makes a bad situation worse, and this can open the eyes of Americans to the shocking violence with which the U.S. military tries, but often fails, to quell dissent in occupied countries. Congress may now object to the transfer of military equipment to police, and Pentagon officials may object to using troops against U.S. citizens at home, but they rarely object when the targets are foreigners or even U.S. citizens who live abroad.

5 -- U.S. interventions abroad, especially the "War on Terror," erode our civil liberties at home. Techniques of surveillance that are tested on foreigners have long been imported to suppress dissent at home, ever since occupations in Latin America and the Philippines. In the wake of the 9/11 attacks, while the U.S. military was purchasing super drones to kill U.S. enemies (and often innocent civilians) and collect intelligence on entire cities, U.S. police departments began buying smaller, but powerful, spy drones. Black Lives Matter protesters have recently seen these "eyes in the sky" spying on them. This is just one example of the surveillance society that the U.S. has become since 9/11. The so-called "War on Terror" has been a justification for the tremendous expansion of government powers at homebroad "data mining," increased the secrecy of federal agencies, No-Fly lists to prohibit people tens of thousands of people from traveling, and vast government spying on social, religious and political groups, from the Quakers to Greenpeace to the ACLU, including military spying on antiwar groups. The use of unaccountable mercenaries abroad also makes their use more likely at home, as when Blackwater private security contractors were flown from Baghdad to New Orleans in the wake of Hurricane Katrina in 2005, to be used against the devastated Black community. And in turn, if police and armed far-right militias and mercenaries can commit violence with impunity in the homeland, it normalizes and enables even great violence elsewhere.

6 -- The xenophobia and Islamophobia at the heart of the "War on Terror" has fed hatred of immigrants and Muslims at home. Just as wars abroad are justified by racism and religious bias, they also feed white and Christian supremacy at home, as could be seen in Japanese-American incarceration in the 1940s, and anti-Muslim sentiment that rose in the 1980s. The 9/11 attacks precipitated hate crimes against Muslims and Sikhs, as well as a federally imposed travel ban that denies entrance to the U.S. for people from entire countries, separating families, depriving students of access to universities, and detaining immigrants in private prisons. Senator Bernie Sanders, writing in Foreign Affairs, said, "When our elected leaders, pundits, and cable news personalities promote relentless fear-mongering about Muslim terrorists, they inevitably create a climate of fear and suspicion around Muslim American citizens -- a climate in which demagogues like Trump can thrive." He also decried the xenophobia resulting from turning our immigration debate into a debate about Americans' personal security, pitting millions of U.S. citizens against undocumented and even documented immigrants. The militarization of the U.S.-Mexico border, using hyperbolic claims of infiltrating criminals and terrorists, has normalized the use of drones and checkpoints that bring the techniques of authoritarian control into the "homeland." (Meanwhile, U.S. Customs and Border Protection personnel were also deployed to the borders of occupied Iraq.)

7 -- Both the military and the police suck up enormous amounts of taxpayer dollars that should be used for building a just, sustainable, and equitable society. Americans are already participating in supporting state violence, whether we realize it or not, by paying taxes to the police and military that carry it out in our names. Police budgets account for an astronomical percentage of cities' discretionary funds compared to other crucial community programs, ranging from 20 to 45 percent of discretionary funding in major metropolitan areas.Per capita police spending in the city of Baltimore for 2020 is an astounding $904 (imagine what every resident could do with $904). Nationwide, the U.S. spends more than twice as much on "law and order" as it does on cash welfare programs. This trend has been widening since the 1980s, as we have taken funds out of poverty programs to put into fighting crime, the inevitable consequence of that neglect. The same pattern is true with the Pentagon budget. The 2020 military budget of $738 billion is larger than the next 10 countries combined. The Washington Post reported -- that if the U.S. spent the same proportion of its GDP on its military as most European countries do, it "could fund a universal child-care policy, extend health insurance to the approximately 30 million Americans who lack it, or provide substantial investments in repairing the nation's infrastructure." Closing the 800+ overseas military bases alone -- would save $100 billion dollars a year. Prioritizing the police and military means deprioritizing resources for community needs. Even President Eisenhower described military spending in 1953 as "a theft from those who hunger and are not fed."

Related Topic(s): Military; Police Abuse Of Power; Police Brutality; Police Violence; Racism; Soldiers; Trump; Violence; Wars, Add Tags
Add to My Group(s)
Go To Commenting
The views expressed herein are the sole responsibility of the author and do not necessarily reflect those of this website or its editors.