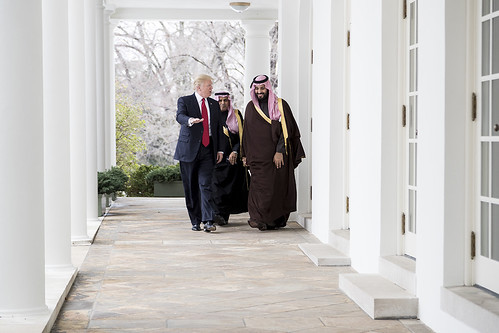 Donald Trump has selected Saudi Arabia as the destination for his first trip abroad, strengthening U.S. ties to a regime that is fueling the very extremism, intolerance and violence that the US government purports to eradicate. Here are 10 reasons why the United States should not be closely allied with the Saudi kingdom.

1/ The Saudis export an extremist interpretation of Islam, Wahhabism, around the globe. Over the past three decades, Saudi Arabia has spent about $4 billion per year on mosques, madrassas, preachers, students, and textbooks to spread Wahhabism and anti-Western sentiment. Let's not forget that 15 of the 19 fanatical hijackers who carried out the 9/11 attacks were Saudis, as was Osama bin Laden himself.

2/ The Saudis fund terrorism worldwide. A Wikileaks-revealed 2009 cable quotes then-Secretary of State Hillary Clinton saying, "Donors in Saudi Arabia constitute the most significant source of funding to Sunni terrorist groups worldwide " More needs to be done since Saudi Arabia remains a critical financial support base for al-Qaeda, the Taliban, Lashkar e-Tayyiba and other terrorist groups." In Syria the Saudis are supporting the most extreme sectarian forces. And while the Saudi government condemns ISIS, many experts, including 9/11 Commission Report lead author Senator Bob Graham, believe that ISIS is a product of Saudi ideals, Saudi money and Saudi organizational support.

3/ The government represses religious minorities. Trump says he is promoting tolerance, but this theocratic Sunni regime is based on repressing the Shia minority and non-Muslims. It is the only country in the world to ban all churches, and atheism is a capital offense. Year after year, the U.S. government's own Commission on International Religious Freedom says Saudi Arabia commits "systematic, ongoing and egregious violations of religious freedom."

4/ Free speech and free association are forbidden in the kingdom. Criticizing the Saudi regime can lead to flogging, long jail sentences or even beheading. Tragic examples are Raif Badawi, languishing in prison for blogging; attorney Waleed Abulkhair, serving a 15-year sentence for defending human rights; and Ali al-Nimr, arrested as a minor and now on death row for nonviolent dissent.

5/ The regime is the most misogynist, gender-segregated country in the world. Women are not even allowed to drive and must live under a guardianship system that gives men authority over the most important decisions in their lives.

6/ There is no political freedom in Saudi Arabia. While most of the world's monarchies have evolved to lessen the role of royalty, Saudi Arabia remains one of the world's last absolute monarchies\. The Saud family picks the king, who then has ultimate authority in virtually every aspect of government. There are no national elections and political parties are banned, as are unions and most civic organizations.

7/ They have engaged in a catastrophic war in Yemen. In March 2015, the Saudis launched a bombing campaign in Yemen that has targeted schools, hospitals, markets, weddings and funerals. The war has resulted in acute malnutrition and disease, leaving a Yemeni child dying every 10 minutes. Instead of supporting the bombing, the US government should be pushing a ceasefire and negotiations.

8/ Saudi Arabia has one of the highest execution rates in the world. Scores of people are killed each year after being convicted of various nonviolent charges that range from adultery, apostasy, drug use and sorcery. The executions are usually carried out by public beheading.

9/ The Kingdom primarily functions on the backs of mistreated foreign laborers. Of the nation's 30 million people, some 10 million are foreigners. Workers from poor nations seek economic gains within Saudi Arabia, but are often lured under false pretenses and then not allowed to leave the country without permission from their employer. Female migrant workers, treated like indentured servants, often face physical and sexual abuse.

10/ Saudi Arabia helps maintain the world's destructive dependence on oil. Saudi Arabia is the largest exporter of oil in the world. With its vast potential for solar energy, Saudi Arabia could lead the world in renewable energy. Instead, the economy remains almost entirely dependent on oil and on the international level, Saudi Arabia works with the United States to oppose global climate agreements that would affect oil profits.

If the Trump administration truly wants to find a way out of the wars in the Middle East and make the United States safer from terrorists, it would do well to stop arming, aiding and abetting the ruthless Saudi regime.

Related Topic(s): Saudi Arabia; Trump Presidency, Add Tags
Add to My Group(s)
Go To Commenting
The views expressed herein are the sole responsibility of the author and do not necessarily reflect those of this website or its editors.