Without a mass movement continually pushing and prodding for real change and holding politicians accountable -- for their policies as well as their words -- our neoliberal rulers assume that they can safely ignore the concerns and interests of ordinary people. 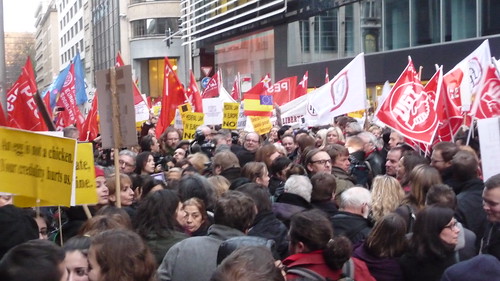 The waves of protests breaking out in country after country around the world beg the question: Why aren't Americans rising up in peaceful protest like our neighbors? We live at the very heart of this neoliberal system that is force-feeding the systemic injustice and inequality of 19th century laissez-faire capitalism to the people of the 21st century. So we are subject to many of the same abuses that have fueled mass protest movements in other countries, including high rents, stagnant wages, cradle-to-grave debt, ever-rising economic inequality, privatized healthcare, a shredded social safety net, abysmal public transportation, systemic political corruption and endless war.

We also have a corrupt, racist billionaire as president, who Congress may soon impeach, but where are the masses outside the White House, banging pots and pans to drive Trump out? Why aren't people crashing the offices of their congresspeople, demanding that they represent the people or resign? If none of these conditions has so far provoked a new American revolution, what will it take to trigger one?

In the 1960s and 1970s, the senseless Vietnam War provoked a serious, well-organized antiwar movement. But today the U.S.'s endless wars just rage on in the background of our lives, as the U.S. and its allies kill and mutilate men, women and children in distant countries, day after day, year after year. Our history has also witnessed inspiring mass movements for civil rights, women's rights and gay rights, but these movements are much tamer today.

The Occupy Movement in 2011 came closest to challenging the entire neoliberal system. It awakened a new generation to the reality of government of, by, and for the corrupt 1%, and built a powerful basis for solidarity among the marginalized 99%. But Occupy lost momentum because it failed to transition from a rallying point and a decentralized, democratic forum to a cohesive movement that could impact the existing power structure.

The climate movement is starting to mobilize a new generation, and groups like School Strike for the Climate and Extinction Rebellion take direct aim at this destructive economic system that prioritizes corporate growth and profits over the very survival of life on Earth. But while climate protests have shut down parts of London and other cities around the world, the scale of climate protests in the U.S. does not yet match the urgency of the crisis.

So why is the American public so passive?

Americans pour their energy and hopes into electoral campaigns

Election campaigns in most countries last only a few months, with strict limits on financing and advertising to try to ensure fair elections. But Americans pour millions of hours and billions of dollars into multi-year election campaigns run by an ever-growing sector of the commercial advertising industry, which even awarded Barack Obama its "Marketer of the Year" award for 2008. (The other finalists were not John McCain or the Republicans but Apple, Nike and Coors beer.)

When U.S. elections are finally over, thousands of exhausted volunteers sweep up the bunting and go home, believing their work is done. While electoral politics should be a vehicle for change, this neoliberal model of corporate "center-right" and "center-left" politics ensures that congress-people and presidents of both parties are primarily accountable to the ruling 1% who "pay to play."

Former President Jimmy Carter has bluntly described what Americans euphemistically call "campaign finance" as a system of legalized bribery. Transparency International (TI) ranks the U.S. 22nd on its political corruption index, identifying it as more corrupt than any other wealthy, developed country.

Without a mass movement continually pushing and prodding for real change and holding politicians accountable -- for their policies as well as their words -- our neoliberal rulers assume that they can safely ignore the concerns and interests of ordinary people as they make the critical decisions that shape the world we live in. As Frederick Douglass observed in 1857, "Power concedes nothing without a demand. It never has and it never will."

Millions of Americans have internalized the myth of the "American dream," believing they have exceptional chances for social and economic mobility compared with their peers in other countries. If they aren't successful, it must be their own fault -- either they're not smart enough or they don't work hard enough.

Related Topic(s): Non-Violence; People Flood Streets In Support; People Power; Propaganda; Protest; Rising Tide Lifts All Boats; Uprisings, Add Tags
Add to My Group(s)
Go To Commenting
The views expressed herein are the sole responsibility of the author and do not necessarily reflect those of this website or its editors.