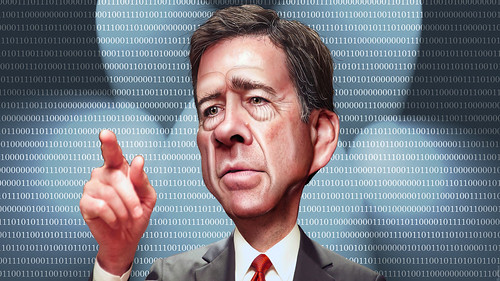 FBI Director James Comey's letter to Congress on new evidence in the Clinton email scandal represents interference in the presidential campaign commensurate with his failure to indict candidate Hillary Clinton for crimes greater than those committed by citizens that are now serving time. His actions are a paradigm for the dysfunctional and dangerous state of the political system in the United States.

Director Comey's letter to Congress of October 28 about "emails that appear to be pertinent in the [Clinton] investigation" was a deliberate, premeditated action that will harm Democratic candidate Hillary Clinton's chances in the presidential election. His letter may have an even greater impact on Democratic Party down-ballot candidates in Senate and House races and, as a result, influence the post election balance of power in Congress.

There is no question that Comey knew that his actions would have significant political impact just days before the election. The fact that he defied established procedures of the Justice Department and instructions from superiors shows the intentional nature of his acts.

Comey's abuse of power and illegal interference in the election is another major marker on the road to the total evisceration of constitutional rights and protection begun in earnest with the Patriot Act of 2001. His actions should be judged as a blatantly illegal act by one of the nation's most powerful law enforcement officials. It doesn't matter if you support Clinton, Trump, Johnson, or Stein. Allowing the FBI to get away with this outrageous attempt to influence elections kills any hope of finally achieving the goal of an open political process and fair elections.

Through his deliberate actions to shift the election, Comey is playing the lead role in a barely disguised coup 'detat to install Donald Trump as President of the United States.

The Department of Justice has established policies for handling legal matters that may impact an election. Former Attorney's General Janet Reno and Eric Holder outlined policies stating that the Justice Department should avoid prosecutions or other actions close to elections that might influence those elections. Attorney General Loretta Lynch made this point to Comey. Despite reports that FBI "agents had not been able to review any of the material, because the bureau had not yet gotten a search warrant to read them," Comey somehow deduced that the emails might be significant. He took the unusual step of informing Congress about the emails he had yet to examine.

"Director Comey acted totally inappropriately. He had no business writing to Congress about supposed new emails that neither he nor anyone in the FBI has ever reviewed."

Does Director Comey think we are idiots? Clearly, he went out of his way to influence the election in a conspicuous fashion. There can be no doubt about this assertion.

After some significant blowback from former Justice officials, Comey felt compelled to write an explanatory memo to FBI employees. He said:

"I also think it would be misleading to the American people were we not to supplement the record [of the original email investigation]. At the same time, however, given that we don't know the significance of this newly discovered collection of emails, I don't want to create a misleading impression. In trying to strike that balance, in a brief letter and in the middle of an election season, there is significant risk of being misunderstood, but I wanted you to hear directly from me about it." James Comey memo to FBI employees, Washington Post, Oct 28, 2016,

Related Topic(s): Donald Trump Campaign; Election; Fbi Director James Comey; Hillary Clinton Emails And Server, Add Tags
Add to My Group(s)
Go To Commenting
The views expressed herein are the sole responsibility of the author and do not necessarily reflect those of this website or its editors.

STAY IN THE KNOW
If you've enjoyed this, sign up for our daily or weekly newsletter to get lots of great progressive content.
Series: "Lawless Nation"