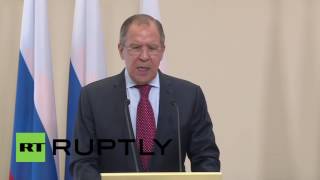 In less than a month Russia and neighboring Belarus are to conduct defensive military exercises which are routinely scheduled every four years and within their own territory.

Here's a sample of how they've been depicted in the West.

The New York Times characterized them as "an exercise in intimidation that recalls the ominous days of the Cold War". [1]

Defense Secretary James Mattis referred to the exercises as "destabilizing".

The "Economist" dubbed the exercises as "Russia's biggest war game in Europe since the cold war alarming NATO" claiming these maneuvers "could be a cover for skullduggery" adding, "People are worried this is a Trojan horse".

The US and NATO claim the number of troops involved are in the range of 100,000.

Russia and Belarus claim some 13,000 troops are involved.

Finian Cunningham in his latest piece skewered the Times and other Western media outlets calling their reporting "The selective hysteria and double think over Russia-Belarusian military defense exercises, which occur every four years...is the brain-dead condition of NATO governments' thinking and Western media reporting...hyping up the forthcoming drill as a foreboding event with the double think inevitably gone into overdrive." [2]

Russian Foreign Minister Sergei Lavrov put it simply, "accusations that these war exercises are anything more sinister than defensive preparations are nonsense".

It's all a continuation of the Russia bashing we've seen since the 2014 US inspired coup in Kiev, Ukraine falsely blamed on Russia. The defense maneuvers with Belarus are just another mischaracterization of the Russian "enemy" being sinister. Russia the "enemy" contrived by "official" Washington, fostered by its complicit corporate MSM- the un-official organ of the state- and all of it part of the neo-con playbook's "Project for the New American Century", June 3, 1997.

Getting back to the Russia-Belarus maneuvers. The idea they are somehow a prelude to a possible Russian invasion of a NATO country is absurd.

Sure Russia could invade Poland, the Baltic countries with conventional weapons and with its superior military probably overwhelm opposing forces in days or weeks.

But why would Russian President Vladimir Putin ever contemplate such a move? Invading any NATO country would require ALL other NATO countries to come to the immediate aid of the invaded country. It would be insane-something Putin is not.

Retired. The author of "DECEIT AND EXCESS IN AMERICA, HOW THE MONEYED INTERESTS HAVE STOLEN AMERICA AND HOW WE CAN GET IT BACK", Authorhouse, 2009
Related Topic(s): Military Exercise; Russian Diplomacy; Russian Foreign Policy, Add Tags
Add to My Group(s)
Go To Commenting
The views expressed herein are the sole responsibility of the author and do not necessarily reflect those of this website or its editors.