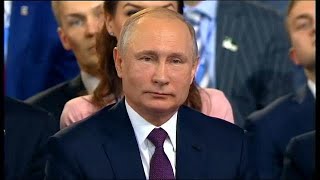 Like a good wine, Russian President Vladimir Putin's famous speech delivered in Munich 10 years ago regarding global security has been rewarded with time. A decade on, the many facets contained in that address have only become all the more enhanced and tangible.

Speaking to a senior international audience at the annual Munich Security Conference, on February 10, 2007, the Russian leader opened by saying he was going to speak about world relations forthrightly and not in "empty diplomatic terms." In what followed, Putin did not disappoint. With candor and incisiveness, he completely leveled the arrogance of American unilateral power.

He condemned the "aspirations of world supremacy" as a danger to global security. "We are seeing a greater and greater disdain for the basic principles of international law," adding at a later point: "One state and, of course, first and foremost the United States, has overstepped its national borders in every way."

But, moreover, Putin presciently predicted that the American arrogance of unipolar dominance would in the end lead to the demise of the power from seeking such supremacy.

A unipolar world, he said, is "a world in which there is one master, one sovereign. And at the end of the day this is pernicious not only for all those within this system, but also for the sovereign itself because it destroys itself from within."

Ten years on from that call, few can doubt that the global standing of the United States has indeed spectacularly fallen -- just as Putin had forewarned back in 2007. The most recent example of demise was the sordid business earlier this month of arm-twisting and bullying by the US at the United Nations over the tabled resolutions repudiating Washington's ill-considered declaration of Jerusalem as the Israeli capital.

Other examples of fallen American leadership can be seen in regard to President Trump's reckless threats of war -- instead of diplomacy -- with North Korea over its nuclear weapons program. Or Trump's irrational and unfounded belligerence towards Iran. The American propensity for using military force regardless of diplomacy and international law leaves most nations feeling a shudder of contempt and trepidation.

Another example of fallen American leadership is seen in the boorish way the Trump administration has unilaterally rejected the 2015 international Paris Accord to combat deleterious climate change. Trump views it as a conspiracy to undermine the American economy, as he alluded to in his recent National Security Strategy. How can such a self-declared global leader be taken seriously, much less, with respect?

Putin's warning that the unipolar-seeking US would "destroy itself" could not be more apt.

Because in order to seek such supremacy, such a power, by necessity of its ambition, must reject the rule of law and the principle of democracy as being nothing other than bothersome constraints on its hegemony.

President Trump likes to talk at times about the "peaceful coexistence of sovereign nation states." But whatever virtue he may be intending or paying lip service to, it is totally negated by American ambitions of unipolar dominance -- ambitions that have been harbored in successive administrations in Washington since the end of the Cold War more than 25 years ago.

To this view of the world, Putin said: "I consider that the unipolar model is not only unacceptable but also impossible in today's world."

The impossibility, and impermissibility, stems from the inevitable tendency of unilateral conduct, which rejects the principle of all being equal under the law. The would-be unipolar hegemon, by definition, sees itself as above the law. Such a self-anointed view of oneself leads to tyranny and abuse of power.

Since the end of the Cold War balance of power between the US and the former Soviet Union, the world has been plunged into a state of permanent wars and conflicts, due to the proclivity of the United States to act alone and on the basis that its "might is right."

Related Topic(s): Corruption; Global Awareness; Politics; Power; Putin, Add Tags
Add to My Group(s)
Go To Commenting
The views expressed herein are the sole responsibility of the author and do not necessarily reflect those of this website or its editors.