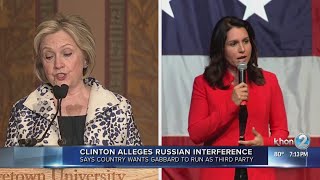 Part I -- Conspiracy Theories All Around

We know that in 2016 Americans elected a president who can't tell the difference between what's real and the stuff he makes up. He appears particularly susceptible to conspiracy theories. Indeed, he has espoused at least 24 of them since becoming president.

We also know that in 2016 the presidential election was interfered with in a manner laid out in the Mueller Report. The villain here was Russia: its cyber agents who used the internet to plant false information in order to sway votes in favor of the megalomaniac who now occupies the White House. Why Russia might have wanted to have a highly neurotic personality in charge in Washington, given a president's capacity to initiate a nuclear war, is a worrisome question. No doubt the fellows in the Kremlin believed Trump was going to act as a reliable and compliant "Russian asset." By the way, the U.S. has done this sort of thing (installing and supporting compliant U.S. assets) over and again. One of the CIA's traditional jobs has been to make sure compliant pro-U.S. leaders stay in power in South and Central America as well as elsewhere -- and being pro-democracy has never been a requirement for the status of a U.S. asset.

If things had gone differently in 2016, we would have had Hillary Clinton in the Oval Office. She would have been our first woman president and also someone who, supposedly, can tell reality from fantasy. Or can she? Just recently she seems to have revealed her own propensity for conspiratorial theories and, guess what, at the center of her delusions are "Russian assets."

In a mid October interview Hillary Clinton claimed that both Representative Tulsi Gabbard (D-Hawaii) and Jill Stein, head of the U.S. Green Party, are being "groomed" to run a third-party race during the 2020 presidential election. Groomed? Groomed by whom? By the Russians, of course. "I think they've got their eye on someone who's currently in the Democratic primary [Gabbard] and are grooming her to be the third-party candidate. She's the favorite of the Russians. They have a bunch of sites and bots and other ways of supporting her so far."

And what of Jill Stein? Clinton's take on Stein is: "Yeah, she's a 'Russian asset' -- I mean, totally. They [the Russians] know they [the GOP] can't win without a third-party candidate [drawing votes away from the Democrats]. So I don't know who it's going to be, but I will guarantee you they will have a vigorous third-party challenge in the key states that they [the GOP] most need." There once was a name for this sort of aspersion. It was called red-baiting -- "the harassing or persecuting of someone on account of ... suspected Russian/Soviet/communist sympathies."

Former Secretary of State Clinton offered no evidence for these accusations. Thus, it's a good example of the fact that, in her own way, Clinton can be as illogical as Trump. Here is how we can demonstrate this: (1) When, according to the Mueller Report, the Russians attempted to help Donald Trump win the presidency, they may well have done so with the unofficial knowledge and acceptance of Trump and some of his campaign staff. If so, that indeed makes Trump a "Russian asset," because it places him and his administration under obligation to the Russians, as well as open to blackmail by Moscow. (2) However, the case of Jill Stein is totally different. Sure, she ran a third-party race in 2016 but there has never been any suggestion that the Russians gave her, or any other Green Party candidate, substantive support. Even if, hypothetically, they had done so, unless you can prove that Stein and her staff knew this was happening and cooperated with it, you cannot demonstrate any obligation to a foreign power, or susceptibility to blackmail. Therefore there is no "asset" status here.

Oh, you might say, the Green Party took away votes from the Democrats and therefore helped Trump win anyway. Well maybe. You would have to back up that claim by showing that a substantial number of Green Party voters would have been willing to vote for Clinton and the Democrats if, say, Stein had withdrawn from the race. My personal feeling is that those numbers would have been low. In any case, it is really absurd to claim that this competitive stance makes Jill Stein a "Russian asset." In fact, "yeah, I mean totally" absurd. (3) Now it appears to be Tulsi Gabbard's turn to be on the receiving end of Clinton's red-baiting. In this case it appears to be Gabbard's vocal disapproval of "regime change wars" (like the one Clinton helped bring about in Libya) and Democratic Party corruption during the 2016 primaries that make her, in Clinton's eyes, a "Russian asset."

Gabbard says that Donald Trump's abandonment of the Kurds in Syria was wrongly executed and thus Trump has their blood on his hands. However -- and this is the position that has drawn Democratic establishment ire -- according to Gabbard, Trump is not alone. "So do many of the politicians in our country from both parties who have supported this ongoing regime change war in Syria that started in 2011, along with many in the mainstream media, who have been championing and cheerleading this regime change war."

This fired up the political and media establishment as represented by Hillary Clinton, the New York Times and CNN. All of them have the same story to tell -- Gabbard is a "Russian asset." Along with her foreign policy criticism, Gabbard has also suggested that the Democratic Party establishment acted in a corrupt fashion by "rigging the primaries" in 2016 so as to assure the defeat of Bernie Sanders. Just as in the case of Jill Stein, there is no evidence that the Russians put Gabbard up to any of this. In fact, her criticisms of both traditional US foreign policy and the Democratic Party establishment are factually sound.

Nonetheless, there are other aspects of Gabbard's views that are worthy of criticism. While she doesn't approve of regime change wars, she is a strong proponent of commando and drone warfare against "Islamic terrorists." She opposed the 2013 treaty with Iran while praising Abdel Fattah el Sissi, the Egyptian dictator, for his anti-democratic attacks on non-violent Islamists trying to work within their country's electoral system. And, she doesn't seem to have much use for diplomacy. Thus, while she is not a tool of Moscow, neither is she good presidential material.

As Jet Heer, writing in The Nation, has pointed out, "the term 'asset' lends itself to turning any dissent from America's foreign policy consensus into evidence of treason if it gets applauded abroad." That means Hillary Clinton is playing with fire. In fact, she and her allies have apparently decided to resurrect an accusatory tactic that mimics the deplorable 1950s behavior of the utterly unethical Joseph McCarthy. She is willing to lower herself to Trump's level in an attempt to lock in place a traditional foreign policy that has generated popular dislike for the United States, fostered endless war, and brought death and destruction to much of the "third world."

Related Topic(s): Criticism; Hillary Clinton; Hillary Clinton War Hawk; Russian Asset; Russian Propaganda, Add Tags
Add to My Group(s)
Go To Commenting
The views expressed herein are the sole responsibility of the author and do not necessarily reflect those of this website or its editors.