When the German transatlantic liner the St. Louis set off with 900 German Jews seeking refuge, it was 1939 and they were trying to escape what became one of the most despicable events in European history. Neither Canada nor the United States offered to help the people on this ship and it sailed on to Cuba.

Seventy-eight years later, almost 400,000 Rohingya have fled Myanmar since the last week of August . In an ethnic cleansing led by the military, they have been driven out, their villages burnt so they have nothing to return to, and, to be doubly certain they stay out, the border peppered with landmines. Their recitation is familiar: killings, rape, torture and individual horrors often too grotesque to describe. The incidents are just the latest in a half-decade long persecution described in horrific detail by a UN report released in February. 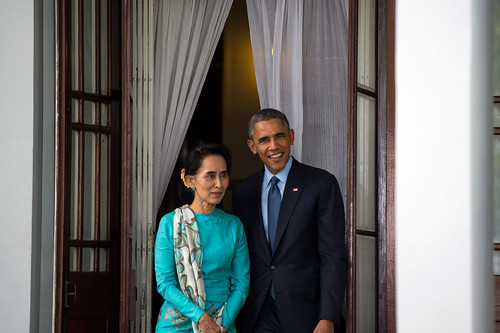 As a former prime minister of Portugal, Guterres is cognizant of the responsibilities of a head of government. Thus it is with sadness one comes to Aung San Suu Kyi, a winner of the Nobel Peace Prize, an icon of patience, calm and fortitude who faced with unwavering courage a military dictatorship that had little regard for human rights.

She has labeled the Rohingyas terrorists and done nothing, while Myanmar's military has determinedly continued its genocide. There is a formal definition of it in the Convention on the Prevention and Punishment of Genocide, which in Article II, describes each of the genocidal acts punishable as a crime. The Myanmar military is guilty of all except the last. It's worse: The February UN human rights report describes killings such as newborns being stamped to death.

There are other reports by Human Rights Watch and Amnesty International displaying copious evidence that Aung San Suu Kyi continues to ignore, claiming the Rohingya are terrorists. She has been uncooperative with the UN, obstructed aid to the region, and even accused aid workers of helping terrorists. Reporters are generally not allowed in the area.

Fellow Nobelists have beseeched Aung San Suu Kyi: Archbishop Desmond Tutu has appealed directly through an open letter, and Malala Yousafzai has repeatedly urged her to protect these vulnerable people. Jody Williams, Shirin Ebadi, Mairead Maguire, Leymah Gbowee and Tawakkol Karman have jointly signed a letter asking "How many Rohingya have to die; how many Rohingya women will be raped; how many communities will be razed before you raise your voice?" It is not new; they have been trying since 2015. Aung San Suu Kyi's silence has been overwhelming.

Arshad M Khan is a former Professor. Educated at King's College London, Oklahoma State University and the University of Chicago, he has a multidisciplinary background that has frequently informed his research. He was elected a Fellow of the (more...)
Related Topic(s): Crime; Genocide; Genocide; Killing; Nobel Peace Prize; Peace Prize Laureates; Rohingya, Add Tags
Add to My Group(s)
Go To Commenting
The views expressed herein are the sole responsibility of the author and do not necessarily reflect those of this website or its editors.