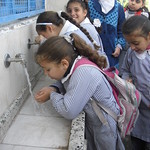 The World Bank denounced the worsening water crisis in the Gaza Strip, calling the situation in the besieged Palestinian enclave “alarming” on Wednesday. In a statement released by the World Bank, senior water and sanitation specialist Adnan Ghosheh stated that only 10 percent of the population in Gaza had access to safe drinking water. The situation has been further worsened by damage inflicted to the existing water infrastructure during Israeli offensives on the coastal enclave. Gaza’s infrastructure has yet to recover from the devastation of three Israeli offensives over the past six years. The slow and sometimes stagnant reconstruction of the besieged coastal enclave has only been worsened by the blockade.