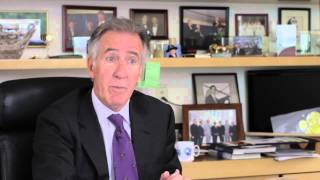 Congressman Neal - Springfield, MA Richard Neal is the U.S. Representative for Massachusetts's 1st congressional district. He is a member of the Democratic Party. He is member of the House ...
(Image by YouTube, Channel: Ubiquity)   Details   DMCA

Incoming Ways and Means Committee chair Rep.Neal (D-Mass.), will soon be in a position to tank healthcare plans that are unacceptable to his insurance industry donors.

Eoin Higgins in Sludge:  "Neal will have near total control over what tax-related policies come to the House floor, at the helm of the committee, rather than a more progressive member, making it much less likely that the House of Representatives will vote on universal healthcare measures."

"Over two-decades Neal has relied on support from the health care industry, receiving $950,000 from health professionals and associations and $750,000 from Big Pharma."