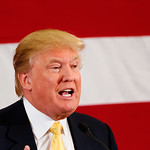 Tragically, America has elected a man who has repeatedly called global warming a “hoax” and who put a climate science denier in charge of his EPA transition team. We’ve elected a man who has vowed to kill the Paris climate deal, end all efforts to help other countries deal with climate change, stop domestic climate action, reinvigorate coal, and zero out all research into climate science and clean energy. Recently, Trump announced a plan to cut $100 billion in climate related federal funding over the next eight years, which can only be done by zeroing out all federal clean energy R&D, efforts to help countries around the globe deal with climate and the entire government’s climate science effort.