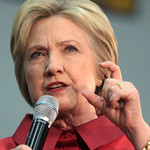 Hillary Clinton
(Image by Gage Skidmore)   Details   DMCA
Donald Trump is pointing to a stream of hacked emails as proof that Hillary Clinton would be a compromised president, but a surprising number of progressives are drawing similar conclusions — albeit for totally different reasons. Some of the left’s most influential voices and groups are taking offense at the way they and their causes were discussed behind their backs by Clinton and some of her closest advisers in the emails, which swipe liberal heroes and causes as “puritanical,” “pompous”, “naive”, “radical” and “dumb,” calling some “freaks,” who need to “get a life.” “We were already kind of suspicious of where Hillary’s instincts were, but now we see that she is who we thought she was,” said one influential liberal Democratic operative. “The honeymoon is going to be tight and small and maybe nonexistent.”
Read the rest of the story HERE: