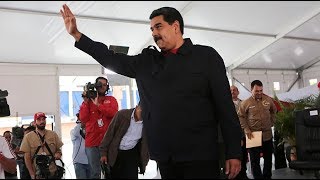 Venezuelans 'excited to be part of history' -- diplomat Venezuela is preparing for the inauguration of the newly elected Constituent Assembly on Friday. Opposition groups have called for mass protests to disrupt the ...
(Image by YouTube, Channel: RT America)   Details   DMCA

Those of us who have been beating the drums for Venezuela seem to have run out of steam. Other headlines crowd out anything about Latin America, except Sanctions on Mexican Footballers and Pop Singers. We, and that includes 99% of us, are easily lured to the bigger stories and scandals - or the Trumpster's latest threats against who-ever.

Reading ICH this afternoon - The Real News, not the Editorials - I came across two or three Venezuelan 'In-Depth' Articles. I only read the 1st one, so far. It is timely, and discusses what happens to 'Leftists' when they are face with a truly Socialist Revolution, rather that Capitalism-Lite, or Democratic Socialism.

They Choke, rather than doubling down!