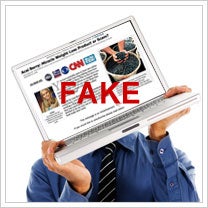 So the FTC Takes Aim at 'Fake News' Websites? Is it such a good thing, without consequence? Should we buy what the newly elected 'big brothers' are selling here?
(Image by entrepreneur.com)   Details   DMCA

With the continuing decline of mainstream journalism, which typically tries to verify facts, the ubiquity of fake news is alarming.  Monday, Zuckerberg acted, joining Google in taking the most serious steps yet to crack down on purveyors of phony stories by cutting off a critical source of funding — the ads that online platforms have long funneled to creators of popular content."The move has raised new questions about long-standing claims by Facebook, Google and other online platforms that they have little responsibility to exert editorial control over the news they deliver to billions of people, even when it includes outright lies, falsehoods or propaganda that could tilt elections."Such claims became increasingly unsustainable amid reports that News Feed and Trending Topics, two core Facebook products, had promoted a number of false, misleading and fantastical political stories.