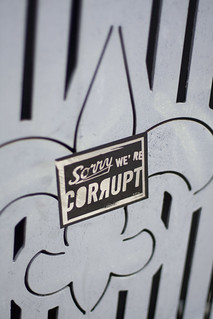 This  investigative report  centers on his activities of Kevin Johnson, mayor of Sacramento, Ca.  (husband of Michelle Rhee  "the controversial school-privatization activist, and there is considerable evidence that their shared desire to turn public schools into engines of profit for private actors is what has driven much, if not most, of Johnson’s more recent wrongdoing. Despite, or perhaps because of, this, he’s enjoyed the profile and appointments of a national figure on the make: public appearances with President Barack Obama, portrayal as a latter-day Metternich by The New York Times, and the patronage of serious players like Michael Bloomberg and Bill Gates."    Even after a a long series of lurid sex and corruption scandals, any one of which would have ended the career of a less fortunate man, this guy is still there, and going after public schools!

Other Series: View All 483 Articles in "PRIVITIZATION."