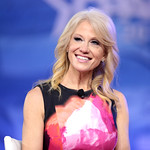 Kellyanne Conway
(Image by Gage Skidmore)   Details   DMCA
A few weeks ago, the House Oversight Committee requested that White House counselor Kellyanne Conway appear at tomorrow’s hearing on the Office of Special Counsel’s recommendation that she be removed from her post—and government entirely—for repeated and willful violations of the Hatch Act, a prohibition against public officials using their government posts to engage in campaign-related activities. OSC head Henry Kerner, himself a Trump appointee, is expected to appear and has already provided blistering written testimony on Conway’s behavior. Conway will not take advantage of this opportunity to clear her name, however. The Trump White House has responded to the committee with yet another round of slash-and-burn immunity claims, this time asserting that even if lawmakers vote tomorrow to issue a subpoena to Conway, the White House will not respect it.
Read the rest of the story HERE: