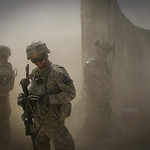 Troops at the border
(Image by The U.S. Army)   Details   DMCA
The White House late Tuesday signed a memo allowing troops stationed at the border to engage in some law enforcement roles and use lethal force, if necessary — a move that legal experts have cautioned may run afoul of the Posse Comitatus Act. There are approximately 5,900 active-duty troops and 2,100 National Guard forces deployed to the U.S.-Mexico border. Some of those activities, including crowd control and detention, may run into potential conflict with the 1878 Posse Comitatus Act. If crossed, the erosion of the act’s limitations could represent a fundamental shift in the way the U.S. military is used, legal experts said.
Read the rest of the story HERE: