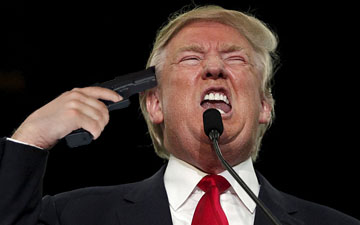 What if Trump loses? 'Stoked by bitterness, anger, and the unbearable color of others, trump supporters are buying into Donald Trump's trope that the election, indeed society, is rigged against them. At his rallies, they love to wear obscene-laced t-shirts, and when Hillary Clinton's name is mentioned, they come alive with chants of 'Lock her up.' They revile fact checking and are disgusted, not by Trump's predatory behavior & despicable comments about women, but by the way the media has reported it. When Trump has moved on to attempting to build a multi-media empire, or an all-expenses-paid Dacha in the Russian countryside, they will be holding a bag of steaming anger., which could make the era of the Tea Party look like, well … a tea party' with m ore attempts at gridlock, and more anger, and an ever-widening opening for the extremist right to dig their heels further into the GOP.