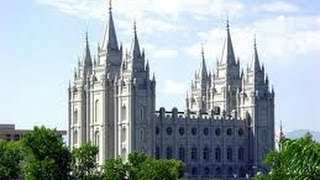 MORMON TEMPLE ENDOWMENT CEREMONY (SLC .LIVE. VERSION w/ Closed Captions) There are only two Mormon temples in the world that perform what is known as a .LIVE. endowment ceremony; Salt Lake City and Manti, Utah. This video was ...
(Image by YouTube, Channel: NewNameNoah)   Details   DMCA

Deseret News spoke to a presidential historian, a senator, and an ambassador about Trump’s emergency declaration; this newspaper and the LDS Tithing Office once shared the same roof.

Margaret O’Malley, professor of history at the University of Washington: “The majority of executive orders are not newsmaking, and were made at moments when presidents know Congress won’t act on an issue, as a way to pave the way for legislative action. His predecessors have invoked national emergencies, in the context of war or health epidemics like the swine flu; he has turned the instrument of a national emergency into something more sharply partisan than it has been in the past.”

"When the going gets rough somewhere in the Middle East, the head of state will often proclaim a state of emergency." Ryan Crocker, who has served as U.S. Ambassador to Afghanistan, Iraq, Pakistan, Syria, Kuwait and Lebanon