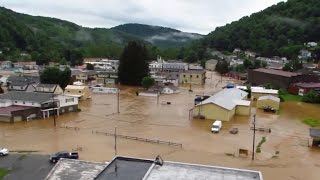 Deadly floods trigger state of emergency in West Virginia
(Image by CBS This Morning, Channel: CBS This Morning)   Details   DMCA
Twenty people have been killed after powerful storms swamped West Virginia on Thursday night, forcing high water rescues across the state and leaving thousands of customers without power through Friday afternoon, officials said. The threat of pop-up showers and overflowing rivers was still a concern Friday, and Gov. Earl Ray Tomblin said that search and rescue efforts remained a priority to help people trapped in flooded-out homes and cars. He said 200 National Guard members have been deployed in eight counties with about 300 more authorized to help with ongoing relief.The heavy rainfall over six to eight hours prompted the National Weather Service to call it a "one-in-a-thousand-year event."
Read the rest of the story HERE: