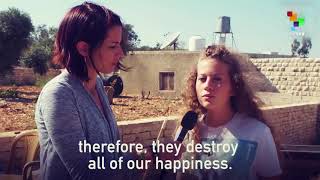 The number of Palestinians classified as terrorists is estimated to be around 5,000 people, (which is less than 1% of  12.37 million Palestinians) Most Palestinians, like most human beings, just want to live in peace. But living under the occupation of the Israeli military makes peace difficult, if not impossible, for the 5 million Palestinians in the Gaza Strip and West Bank.  Only a small percentage are terrorists, yet terror is what many governments and the media broadcast. That narrative is pure propaganda, meant to divide and control people. We need to humanize the narrative and break the cycle. Just as people have been taught to hate, they can be taught to love. Ahed Tamimi is one of those Palestinians living an occupied life. Until she is free, none of us will be free.