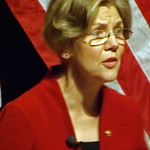 Massachusetts Sen. Elizabeth Warren and Maryland Rep. Elijah Cummings, both Democrats, have requested a formal review of President-elect Donald Trump's "taxpayer-funded transition" as well as of potential conflicts of interest that could arise between Trump's administration and the Trump Organization. In a letter sent to the Government Accountability Office on Wednesday, Warren and Cummings characterized Trump's transition as "chaotic" and asked that the GAO review possible conflicts of interest related to Trump's and his family's relationships to his businesses, potential national security concerns related to Trump's communication with foreign leaders and diplomats, and "transparency related to the use of taxpayer funds in the transition."