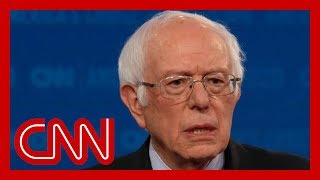 A new Sanders campaign video titled “Bernie Would Be the First Jewish President,” strikes a blow against US anti-Semitism and marks a milestone in his decision to put his Jewishness front and center in his 2020 presidential campaign, after he was accused of downplaying his background during his run in 2016.

Here’s a link to the actual video

Jamie Margolin opens the video declaring that Sanders’ presidency representa “blowback” in the battle against bigotry. Recalling the "Unite the Right" rally in Charlottesville, white nationalists chanted “Jews will not replace us,” Margolin comments with a flourish that “having a Jew literally replace them would be so satisfying!” Margolin's statement ties the Charlottesville white nationalists to Trump; the Sanders video features Trump’s comment that in Charlottesville there were “very fine people on both sides,” that Jews voting Democrat have “great disloyalty” to Israel.