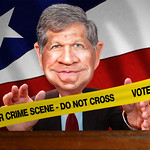 Crimes Against Ohio Voters
(Image by DonkeyHotey)   Details   DMCA
As the Nov. 8 elections loom, officials in Ohio have removed tens of thousands of voters from registration lists because they have not cast a ballot since 2008. All U.S. states periodically cleanse their voter rolls, but only a handful remove voters simply because they don’t vote on a regular basis. And nowhere could the practice have a greater potential impact in the state-by-state battle for the White House than Ohio, a swing state that has backed the winner in every presidential election since 1960. Voters of all stripes in Ohio are affected, but the policy appears to be helping Republicans in the state's largest metropolitan areas, according to a Reuters survey of voter lists.
Read the rest of the story HERE: