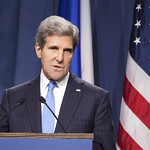 Secretary of State John Kerry
(Image by US Mission Geneva)   Details   DMCA
U.S. Secretary of State John Kerry said on Sunday the Obama administration would do everything it could to implement a global agreement to combat climate change before President-elect Donald Trump takes office. Donald Trump, who calls global warming a hoax and has promised to quit the Paris Agreement, was considering ways to bypass a theoretical four-year procedure for leaving the accord, according to a source on Trump’s transition team. Kerry declined to speculate on what Trump might do about the Paris Agreement and noted that there was sometimes a difference between campaigning and governing.
Read the rest of the story HERE: