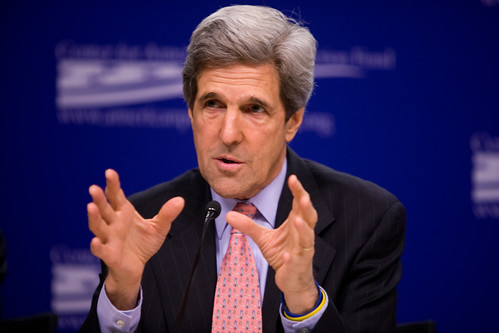 John Kerry
(Image by Center for American Progress Action Fund)   Details   DMCA
The United States and Russia early Saturday announced a breakthrough agreement on Syria that foresees a nationwide cease-fire starting on Monday, followed a week later by an unlikely new military partnership targeting the Islamic State and al-Qaida as well as new limits on President Bashar Assad’s forces. After a daylong final negotiating session in Geneva, U.S. Secretary of State John Kerry said shortly after midnight Saturday that the plan could reduce violence in Syria and lead to a long-sought political transition, ending more than five years of bloodshed. He called the deal a potential ‘‘turning point’’ in a conflict that has killed as many as 500,000 people, if complied with by Syria’s Russian-backed government and U.S.-supported rebel groups.
Read the rest of the story HERE: