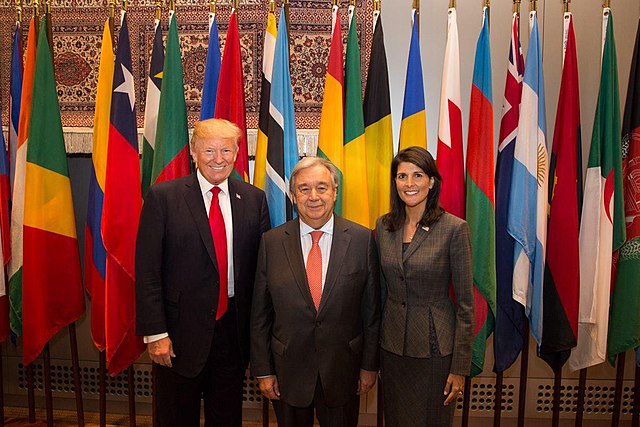 President Trump, Ambassador Haley, and UN Secretary General Guterres
(Image by (From Wikimedia) Shealah Craighead  (1976–)   / https://flickr.com/photos/whitehouse/37425398162/, Author: See Source)   Details   Source   DMCA
This is the low-point of the past year - Yet, it is also the beginning of the return of RA! The Sun will return, the Days will lengthen. Darkness will vanish.

UN Human Rights Commissioner has announced he will not seek a 2nd term. The US is pressuring him to get back on track and Support Trump's recognition of Jerusalem as the Capital of Israel - With all the Religious and Political and Social Pressure that would entail.


UN Secretary-General Antonio Guterres had allegedly “urged Zeid to tone down his critics of Trump, fearing that it could risk losing US support for the United Nations.”
Read the rest of the story HERE: