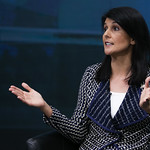 U.S. withdraws from the Human Rights Council
(Image by US Mission Geneva)   Details   DMCA
The United States is withdrawing from the United Nations Human Rights Council citing "chronic bias against Israel," U.S. Ambassador to the U.N. Nikki Haley said Tuesday. Although numerous officials have said repeatedly that "America First does not mean America Alone," the administration has retreated from multiple multilateral accords and consensuses since it took office. Haley has been the driving force behind withdrawing from the human rights body, which would be unprecedented in the 12-year history of the council. No country has ever dropped out voluntarily. Libya was kicked out seven years ago.
Read the rest of the story HERE: