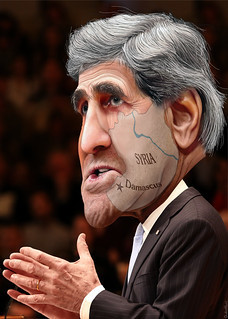 John Kerry - Saving Face
(Image by DonkeyHotey)   Details   DMCA
Secretary of State John Kerry said on Saturday Syria's President Bashar al-Assad has to go but the timing of his departure should be decided through negotiation. Speaking after talks with British Foreign Secretary Philip Hammond in London, Kerry called on Russia and Iran to use their influence over Assad to convince him to negotiate a political transition. Kerry said the United States welcomed Russia's involvement in tackling the Islamic State in Syria but a worsening refugee crisis underscored the need to find a compromise that could also lead to political change in the country. "We need to get to the negotiation. That is what we're looking for and we hope Russia and Iran, and any other countries with influence, will help to bring about that, because that's what is preventing this crisis from ending," said Kerry.
Read the rest of the story HERE: