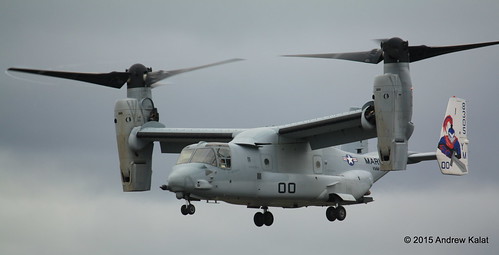 USMC MV-22 Osprey
(Image by Andrew Kalat)   Details   DMCA
Rescue teams were searching for three U.S. Marines missing after their aircraft crashed into the sea off Australia's east coast on Saturday, the U.S. Marine Corps said. Twenty-three other personnel aboard the MV-22 Osprey tilt-rotor aircraft had been rescued. The Bonhomme Richard Expeditionary Strike Group was in Australia to participate in joint training maneuvers involving more than 33,000 U.S. and Australian military personnel, which ended two weeks ago. The exercises included the participation of MV-22 Ospreys practicing the deployment of U.S. Marine reconnaissance teams.
Read the rest of the story HERE: