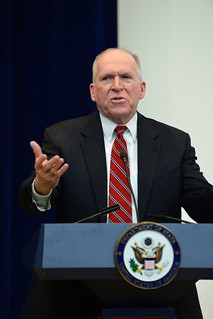 CIA Director Brennan
(Image by U.S. Department of State)   Details   DMCA
The FBI and Secret Service are investigating reports that non-government personal accounts associated with CIA Director John Brennan as well as Department of Homeland Security Secretary Jeh Johnson were hacked. The New York Post first interviewed the alleged hacker, who said he accessed an AOL email account associated with Brennan that included files regarding his security clearance application, and the hacker also claims to have accessed a Comcast account associated with Johnson. The alleged hacker said he was motivated both by politics and by the desire to shame the government.
Read the rest of the story HERE: