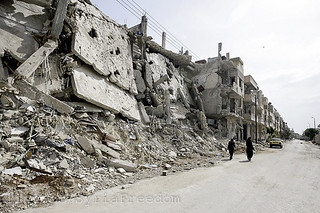 Syrian destruction
(Image by FreedomHouse)   Details   DMCA
The United States and Russia announced plans for a cessation of hostilities in Syria would take effect on Saturday but exclude militants from the Islamic State, Nusra Front and others the United Nations deems as terrorist groups. However, the U.S.-Russian plan leaves a loophole by allowing continued attacks, including air strikes, against Islamic State, Nusra and other militants. Because of the mingling of forces, this could result in continued attacks against armed opposition members who are parties to the cessation of hostilities.
Read the rest of the story HERE: