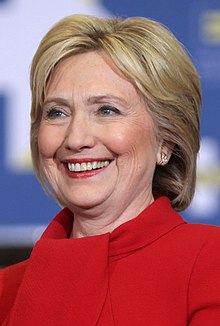 Hillary Clinton
(Image by en.wikipedia.org)   Details   DMCA
Democratic presidential hopeful Tulsi Gabbard has filed a defamation suit against Hillary Clinton for calling her a “Russian asset,” according to newly filed court papers. “Tulsi Gabbard is running for President of the United States, a position Clinton has long coveted, but has not been able to attain,” Wednesday’s Manhattan federal lawsuit reads. “In October 2019 — whether out of personal animus, political enmity, or fear of real change within a political party Clinton and her allies have long dominated — Clinton lied about her perceived rival Tulsi Gabbard. She did so publicly, unambiguously, and with obvious malicious intent.”
Read the rest of the story HERE: