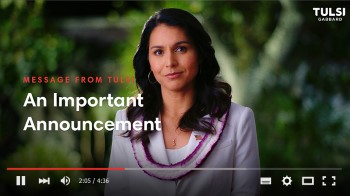 Gabbard entered the race in January 2019 with an intriguing profile: a woman of color, a military veteran, a millennial who advocated for new voices within the Democratic Party. She resigned as vice chair of the Democratic National Committee in 2016 to endorse Sen. Bernie Sanders.

What set Gabbard apart was how long she stayed in the race despite not winning more than 4 percent of the vote in any contest except tiny American Samoa (where she was born).

Upon dropping out, Gabbard also endorsed former VP Joe Biden, despite the fact that her 2016 pick, Sanders, is still in the race.

It would also seem to foreclose the possibility that Gabbard will run as a third-party candidate in the general election, perhaps splitting the Democratic vote and throwing the election to Trump.