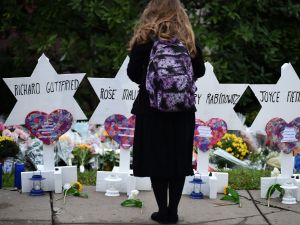 53,000 Tell Trump: You're Not Welcome In Pittsburgh
(Image by forward.com)   Details   DMCA
President Trump landed in Pittsburgh Tuesday to pay tribute to the 11 victims of the mass shooting at a synagogue there — but he traveled with no official public itinerary in advance, little planning, and without the congressional and local leaders the White House invited on the trip. Trump and first lady Melania arrived in the grieving city shortly before 4 p.m., with the only visible greeters at Pittsburgh International Airport a military official and a woman dressed in black. Then the first couple — accompanied by daughter Ivanka Trump and son-in-law Jared Kushner, senior White House advisers who are Jewish — at Tree of Life synagogue, where Saturday’s shooting occurred, in an unannounced appearance
Read the rest of the story HERE: