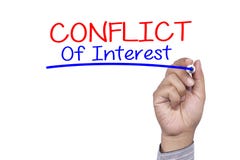 Conflict Of Interest Royalty Free Stock Photo - Image: 34001955
(Image by dreamstime.com)   Details   DMCA
Federal ethics experts call request a conflict of interestFederal ethics experts for former Democratic and Republican administrations warned Thursday that President-elect Donald Trump is creating a major conflict of interest by allowing his Virginia vineyard to seek special temporary visas for foreign workers. Trump, who is president of the Charlottesville vineyard that applied this month for H2 visas for six foreign workers, will soon run the U.S. government, which determines whether to grant those visas. “This is a powerful example of why Donald Trump needs to make a definitive break, not just with his operational interests but his ownership interests, by appointing an independent trustee to liquidate all that,” said Norm Eisen, a visiting fellow at the Brookings Institution who was chief White House ethics lawyer for President Obama from 2009 to 2011.'
Read the rest of the story HERE: