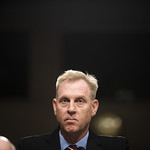 Patrick Shanahan
(Image by Chairman of the Joint Chiefs of Staff)   Details   DMCA
President Donald Trump is expected to nominate Patrick Shanahan as secretary of defense, the White House announced Thursday. Shanahan, who has no military experience and is the current acting secretary, worked at Boeing for more than 30 years before Trump tapped him to serve as deputy defense secretary in 2017. He was thrust into the role of acting Pentagon chief at the start of this year, after Trump ousted Defense Secretary James Mattis. White House press secretary Sarah Sanders said Shanahan "has proven over the last several months that he is beyond qualified to lead the Department of Defense, and he will continue to do an excellent job."
Read the rest of the story HERE: