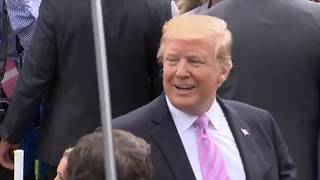 Donald Trump .Not Even a Little Bit. Worried of Impeachment
(Image by YouTube, Channel: BlazeTV)   Details   DMCA
President Trump on Wednesday said that he would attempt to challenge impeachment in the Supreme Court if Democrats carried out such proceedings, though it's unclear the high court would hear such a case. "The Mueller Report, despite being written by Angry Democrats and Trump Haters, and with unlimited money behind it ($35,000,000), didn’t lay a glove on me. I DID NOTHING WRONG," Trump tweeted. "If the partisan Dems ever tried to Impeach, I would first head to the U.S. Supreme Court. Not only are there no 'High Crimes and Misdemeanors,' there are no Crimes by me at all," he continued.
Read the rest of the story HERE: