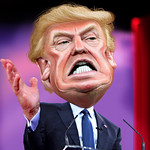 Donald Trump - Caricature
(Image by DonkeyHotey)   Details   DMCA
Trump on Tuesday sought to walk back his widely-criticized remarks at a press conference with Russian President Vladimir Putin a day earlier, saying he accepts the U.S. intelligence community’s assessment that Russia interfered in the 2016 election. But Trump muddled the walk-back by saying that “other people” also could have been involved, a statement similar to remarks he’s made in the past casting doubt on Russia’s involvement. “I accept our intelligence community's conclusion that Russia's meddling in the 2016 election took place,” Trump said, reading from a prepared statement in front of reporters at the White House. But he added: “Could be other people also. A lot of people out there.”
Read the rest of the story HERE: