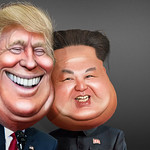 Donald Trump and Kim Jong-un - Caricatures
(Image by DonkeyHotey)   Details   DMCA
When President Trump agreed to pause military exercises between the U.S. and South Korea, he gave Kim Jong Un a concession on an issue that has angered North Korea like few others. Pyongyang has long said it views such joint drills as preparation for an invasion. The president's revelation that he planned to put the "war games" on hold was part of the agreement with Kim to work "toward complete denuclearization of the Korean Peninsula." But both the Pentagon and South Korea's military appeared to have blindsided by Trump's statement.
Read the rest of the story HERE: