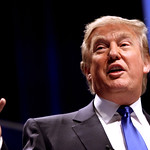 Donald Trump
(Image by Gage Skidmore)   Details   DMCA
While in Asia, Press Secretary Sarah Huckabee Sanders issued the official White House response on Moore. “Like most Americans the president believes we cannot allow a mere allegation, in this case one from many years ago, to destroy a person’s life," she told reporters last week aboard Air Force One. "However, the president also believes that if these allegations are true, Judge Moore will do the right thing and step aside." But the silence from Trump — as the president of the United States, as the leader of the Republican Party and as someone who is never afraid to tweet what’s on his mind — speaks volumes.
Read the rest of the story HERE: