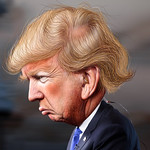 Down the rabbit hole we go, curiouser and curiouser. Donald Trump followed his pathetic performance in the first one-on-one debate with Hillary Clinton with a series of abusive taunts of a former beauty queen, an insistence that polls show him “winning” the debate (none that I’ve seen) and a promise to pound Clinton with her husband’s past marital infidelities. Once more lowering the bar for presidential nominees of a major political party — Trump is rolling the bar in sludge — his response to his unpopularity among women voters is to further alienate them with fat-shaming and schoolyard bullying. Where else can this man take us?