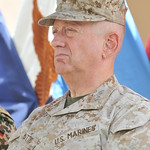 General James Mattis
(Image by ResoluteSupportMedia)   Details   DMCA
A former Army Special Forces officer is accusing retired Marine General James Mattis, President-elect Donald Trump's pick to be defense secretary, of 'leaving my men to die' after they were hit by friendly fire in Afghanistan in 2001. Mattis has not commented publicly on the incident, which was chronicled in a 2011 New York Times bestselling book, 'The Only Thing Worth Dying For,' by Eric Blehm. The book portrays Mattis as stubbornly unwilling to help the Green Berets. Trump's transition team did not respond to request for comment from NBC News. Nor did Mattis, whose 2013 retirement from the military means he would need a waiver from Congress to serve as the civilian Pentagon chief.
Read the rest of the story HERE: