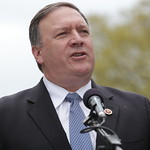 Representative Mike Pompeo, President-elect Donald Trump's surprise choice to head the CIA, supports the U.S. government's sweeping collection of Americans' communications data and wants to scrap the nuclear deal with Iran. The retired Army officer, West Point and Harvard Law School graduate also has defended the CIA's use of interrogation techniques that are widely condemned as torture. The Kansas Republican has criticized Democratic presidential candidate Hillary Clinton's use of a private email server as secretary of state and her handling of the 2012 attacks on U.S. posts in Benghazi, Libya. A member of the House of Representatives Intelligence Committee, Pompeo, 52, was first elected in the 2010 Tea Party wave from the congressional district centered on his hometown of Wichita.